The God Of Intellect As I Perceive Him

Poem by Gayathri B. Seetharam

The God of Intellect as I perceive him
-Gayathri B. Seetharam
I decided to wait on my sculpture project
Which I might turn into a painting, The Metaphorical Composition,
Of my two hands joined together to signify bloom with a lupin inside it,
To show that my womb gave birth to a boy turned young man;

Since my 21-22 year old son graduates in the summer semester,
I want to gift him with the God of Intellect
So the painting or sculpture serves him in good stead
And I thought that a sculpture with his likeness made as a bust
And with a graduation hat that has roses in bloom painted on it
Might make him seem woolly headed;

OR the same bust with a graduation hat that has lit candles painted on it
Might be an inappropriate composition for
Candles and lamps are lit for God
Or to bring peace to the dead;

OR I settled on making the same bust with a graduation hat
That has white light dispersing into seven VIBGYOR colours
To symbolise that the pursuit of intellect is a joyful process
That leads to the "Socratic method" in law and life;

In Hindu culture, the intellect is given a high value
And the religion being female friendly, has the Goddesses
Epitomising Intellect, Wealth and Sweetness
Which are the three S's in Kannada, Siddhi, Siri and Sihi;

I must bring in the elephant God, Ganesha, who brings, study and intelligence
To his worshippers
And in passing, I think that Hinduism as The God Particle's author, Leon Lederman,
Has said, was created by a Goddess who made the God particle, the boson, and the Universe;

Please do understand that the God of Creativity and Creation has three heads
And the God of Wealth and Prosperity sleeps on a snake with his wife and is never without her
And the God of Darkness and Destruction has snakes around his neck
I may talk blasphemy but I fancy Jesus Christ, the Saviour, for a romantic encounter,
For as a woman, I do not care for the three main gods and there is a fourth romantic God, the famous Krishna,
Who has too many wives to give a woman of spirit and soul, lasting peace;

But I ain't the religious sort and say that Hindu men worship their women and
Personify them with winning human elements of personality
For all the three goddesses are beautiful with winning figures
And it is a puzzling fact that men who are good examples of God's creative power
Have created such fearful male gods;

However, I digress from my original point of discussion
And say that I shall not make Rodin's The Thinker with a graduation hat
For the original sculpture depicts a nude man
And I have already painted my son in the form of a young lad coming out of my Monet's Waterlilies-like womb
As Michaelangelo's David who is nude and hence, vulnerable to the world at large. 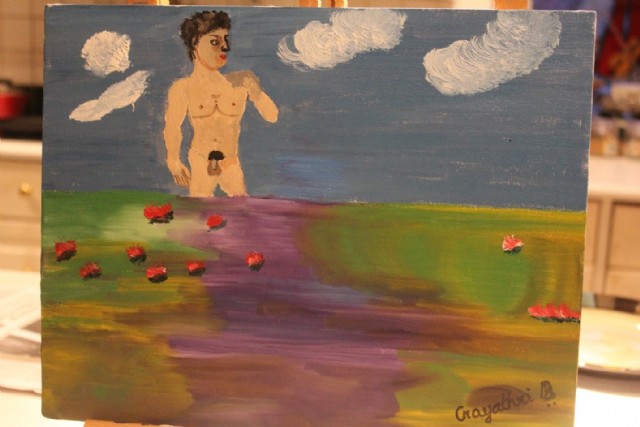 Topic(s) of this poem: human, mind


Add this poem to MyPoemList

The God Of Intellect As I Perceive Him

5 out of 5
0 total ratings
rate this poem
There is no comment submitted by members..