Rating: ★4.4
The Peace Warrior Of Mzansi, among heroes - a colossus!
Sun Of The Nation; A rare gift of Providence.
Once, entangled in the web of racist succubus;
Unruffled he declares before High Justice: '[I]t is an ideal for which I am prepared to die.' Silence -
Pregnant with dreadful menace in court ensued.
A beast of burden consequent of unshakeable stance.
In the slammer Symbol Of The Struggle he attained;
But Apartheid demon persisted in its Treachery.
'Coalition Of Conscience' inspired outcry for Liberty;
Plagues of sanctions shatter manacles of Slavery.
Looming on the horizon - a sight of Equality.
From abyss of darkness emerged the Institution;
The Immortal Icon and Mastermind of Rainbow Nation.

NOTE: This compact synopsis of Dr Nelson Madiba Mandela
is a story about his journey from The Rivonia Trial
(where he was charged with TREASON -
an offence carrying death penalty by HANGING)
to Freedom and Democracy.

He was after much... sentenced to life imprisonment
with hard labour.

The piece is a poetic portrait of the cosmopolitan juggernaut,
whose enigmatic radiance of love was tested far beyond
the experience flesh has to endure.

It is a soulful tale of the great icon of peaceful resistance,
who had gone from prison (for 27 years)to become
the first democratically elected President of South Africa.

May his wonderful and gentle soul continue to rest
in the Bosom Of Almighty God.


Mzansi is another name for South Africa - an affectionate name. 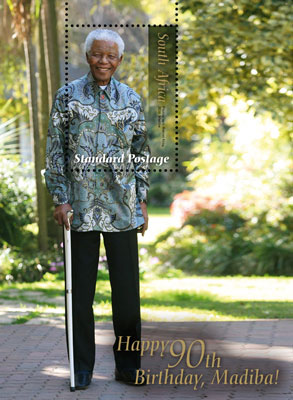 Chinedu Dike
Topic(s) of this poem: freedom,liberty,nelson mandela,slavery
READ THIS POEM IN OTHER LANGUAGES